The Kentucky Horse Park Mounted Police Stables are located in the center of the park where officers provide daily barn tours and perform their patrol duties either by horseback, motor vehicle, on foot or golf cart. Mounted Patrols are effective for crowd control in many ways. They are the first responders in emergency situations and play an important role in helping the park both daily and during special events.

Patrolling from horseback, KHP Mounted Police officers establish a dialogue with tourists and the horse community alike. This dialogue allows them to be goodwill ambassadors of the Kentucky Horse Park. The KHP Mounted Police has also been instrumental in promoting the park by providing demonstrations for school groups, participating in parades, and other high profile events.

As our guests come to the Kentucky Horse Park to visit with horses, the KHP Mounted Police horses are oftentimes the first ones they come into contact with. Guests can tour our stables where we house our equine police force, interact with the officers, and pet the police horses. We also have model horses set up in the police barn so that guests can see the different uniforms our equine officers wear and take a look in our expansive tack rooms.

Generally, the mounted police horses are a draft or draft crossbreed that are big-boned and durable, but also athletic in build. They possess a kind disposition and are docile, friendly, and curious in character. By the time they complete their training, our police horses are basically bomb-proof, and relaxed in any situation. Here are all the current horses in our mounted police force. 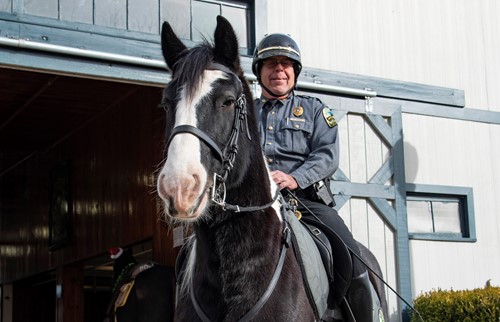 Turk is ridden by Officer Foster. Turk came to the Kentucky Horse Park from Oregon and performed in the Parade of Breeds for a few months until discovering how good of a Police Horse he was. Before coming to Kentucky, Turk was a competitive show horse competing at 3rd level Dressage.

Turk’s favorite things to do are to roll in the mud to get super dirty and get all the attention from the Park's visitors. Turk loves to get his picture taken, especially with little kids!

The Drum Horse is a breed that originated in England to carry steel drums on their backs for the parades and processions for the queen. These horses are required to have a docile and brave demeanor. Being a Drum Horse allows Turk to be a great Police Horse. Turk is always down for a new adventure and going into large and noisy crowds. 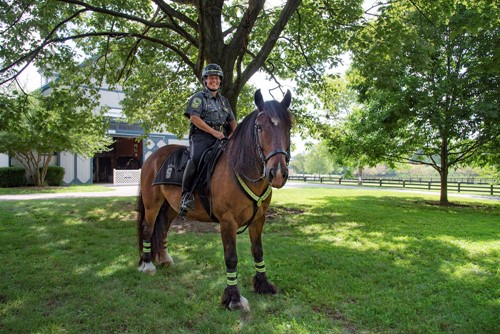 Mackenzie is ridden by Officer Geer. Before starting his riding career in 2015, Mackenzie was used to pull a cart. Mackenzie has since excelled in all things riding from basic equitation, dressage, and his personal favorite–jumping.

Mackenzie’s favorite food is Vanilla Wafers and he will do anything to get one. He tends to be the lone wolf of the herd and prefers to be by himself. Although he can make some grumpy faces he is actually a total sweetheart once he gets to know you.

Clydesdale’s are large workhorses from Scotland that are known for their stamina to work all day and eagerness to do any task you give them. The Dales Pony is a breed of pony that is known for its work in the coal mines of Northern England. They are spirited and are extremely tough due to their surroundings. All of these characteristics make Mackenzie shine in his Police work. 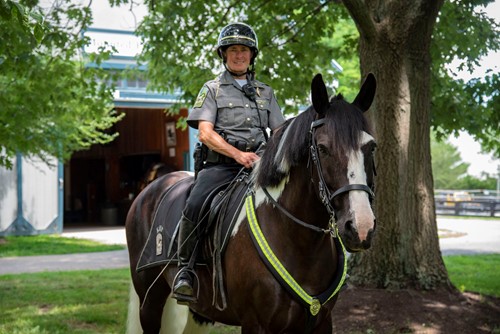 Oliver is ridden by Captain Rakes. Oliver came to the Park as a five-year-old and has since worked all Park events, including downtown parades, ceremonial duties, and a trip to Washington D.C. He was the 2019 Breyerfest Celebration Horse of the year and has his own Breyer and merchandise.

Oliver is in love with all things food! If it was up to him he would eat all day long. His favorite food is bananas, but especially banana peels.

The English Shire is a breed that was originally a warhorse that was trained to bite and kick their enemies on command. Although Oliver would never want to hurt anyone, he does have the bravery that would have been needed.

The American Paint Horse is where Oliver gets his beautiful two-toned pattern. But that’s not all that Oliver got from the Paint. He also inherited the amazing drive to work all day. 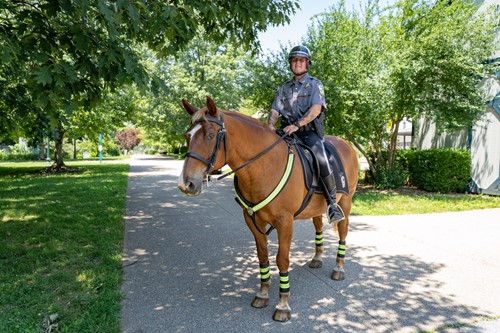 Sunny is ridden by Officer Baldi. Before residing at the Kentucky Horse Park, Sunny moved around a couple of different departments only to find the Horse Park to be his loving home. He is a sensitive soul but a very kind horse to be around. Sunny has never met someone that isn’t his friend.

Sunny’s favorite thing to do is to get love and attention from everyone that comes to the park. He might not seek out the attention but if you come to him and you sweet talk to him, he will become your best friend and might even give you a kiss. 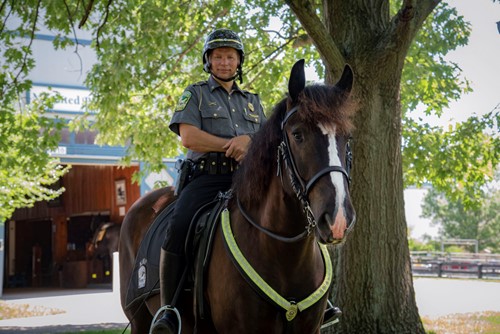 Koda is ridden by Sergeant Johnson. Koda came to the Kentucky Horse Park from Last Chance Corral as an orphaned nurse mare foal at about 5 months old. Koda is a giant puppy dog that has never met a stranger. But because he is so big and still so young, he is also a bull in the china shop.

Koda is always down for a new adventure and will do anything you put in front of him. His favorite thing is to patrol around the park and learn new things. He will always accept scratches, all over his neck and withers.

Being a nurse mare foal, we don’t quite know what breeds make up Koda. All we can guess is probably a Percheron gene due to the size, eagerness to work all day, and bravery. 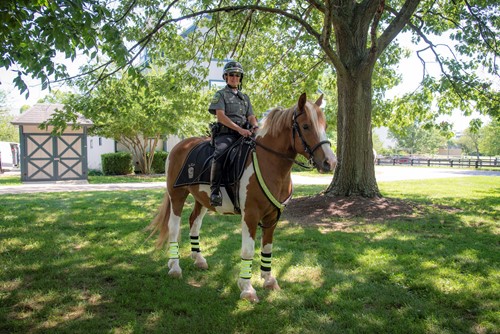 Henri is ridden by Captain Rakes. Henri came to the Kentucky Horse Park from Last Chance Corral as an orphaned nurse mare foal at about 5 months old. Henri is the most mentally mature of the three foals. Henri and Oliver are like two peas in a pod and are best friends.

Henri’s favorite thing in the entire world is nap time! You will most likely find him in his stall, sprawled out and dreaming around mid-day. He will protest if you try to get him up by groaning and refusing to get up.

Being a nurse mare foal, we don’t quite know what breeds makeup Henri. Our best guess is the American Paint Horse due to his coloring. The other part is definitely a draft breed, most likely a Belgian Draft but we don’t know for certain. 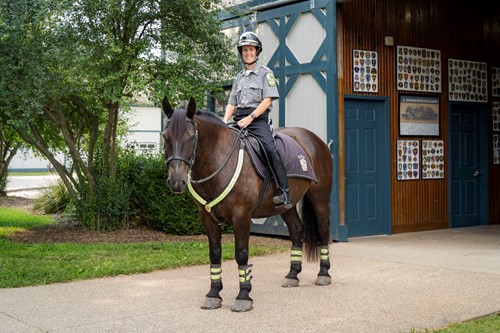 Parker is ridden by Jessica Lyons. Parker came to the Kentucky Horse Park from Last Chance Corral as an orphaned nurse mare foal at about 5 months old. Parker has always been the smallest of the three foals adopted, giving him the loving nickname of Wee-Man.

Parker’s favorite thing is attention from every person on the Park and demands for everyone to pay attention to him. He does this by either coming up to you if he sees you, or he will bang on his stall door to let everyone know he is there.

Being a nurse mare foal, we don’t quite know what breeds makeup Parker. All we know for certain is he is a draft cross of some sort. Whatever you want to believe is in him, it’s in him! 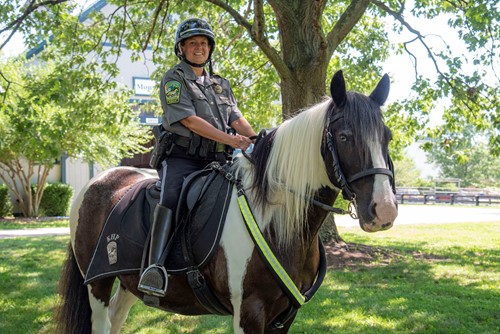 Billy is ridden by Officer Sedlaczek. Billy in his younger days had many careers in different disciplines. His first career was show pleasure driving. Eventually, he moved onto a riding career of saddle seat. Today you can find Billy either here in the Mounted Police Barn or in the Breeds Barn all dressed up, showcasing his breed.

Billy’s favorite thing in the entire world is food! He also loves getting attention from all of the visitors that come to the park. Billy is definitely a visitor favorite with his blue eyes, long mane and feather, and his charming attitude.

Billy is a Gypsy Vanner which is a breed from the Gypsy/Roma community. The Vanner’s would pull carts from place to place during the day and at night would become the nanny horse and babysit the children. This helps Billy be the best police horse with his stamina and strength to go all day and his friendly attitude to interact with the visitors. 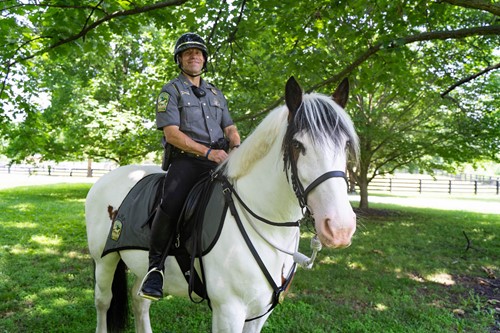 Legend is ridden by Officer Rakow. “Drum“ roll please... The Kentucky Horse Park is proud to present Legend! As the newest and youngest member of our mounted unit, Legend is very smart and a quick learner.

Officer Legend makes use of his off-duty time by taking a nap to make sure he is refreshed and ready to go for his next assignment. When he isn’t patrolling the horse shows or meeting park visitors, he thoroughly enjoys giving himself a good Kentucky Mud Bath.

Legend is a Drum Horse. The American Drum Horse is a modern American breed of European draft horse. Originally from England, the Drum Horses of the Queen’s Household Cavalry were used to carry the drummer and large kettle drums used during parades and processions. It is this background that makes Legend an excellent police horse!